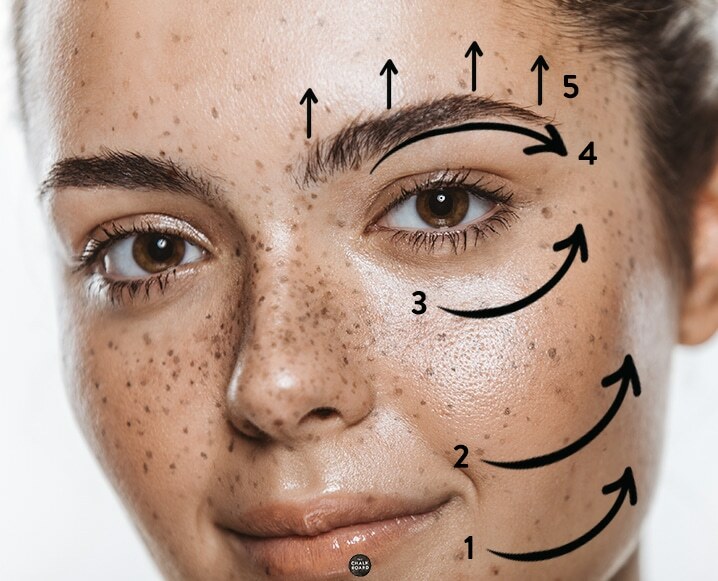 The truth is, we’ve been talking about the practice incessantly for a while, but we’ve noticed a huge uptick in renewed interest lately. Maybe it’s a TikTok thing!

Firstly, what is Gua Sha?

In short, a small tool made of crystal or stone to massage the face and aid circulation and drainage. Take a look at LANSHIN's beautiful range via Net-a-Porter here...

Gua sha is a traditional East Asian and Chinese technique used to invite well-being, circulation and remove stagnant toxin build-up in the body. It is used gently on the skin of the face, and quite aggressively on the skin of the body. Gua means scrape and sha means sand, and this practice has been used for thousands of years. The tools used in the practices range from a Chinese soup spoon, to an animal bone and horn, to rose quartz gemstones. According to Traditional Chinese Medicine, the entire channel organ system unites on the face.

For context, gua sha pre-dates acupuncture. The stroke pattern used awakens the meridian lines (lifeforce path) to activate the body’s natural healing abilities. For the skin, it encourages collagen production (strength in cells). It sculpts and tones the face shape, allowing inflammation to drain and muscles to become free of tension — allowing them to do their supportive jobs properly. It also helps the skin return to its most radiant state as circulation is increased, sending nutrients to areas that may have been starved because of blockage.

Gua sha’s effect is more than skin deep. Because the meridian lines are enlivened, organs such as the stomach, liver, spleen, heart and kidneys also receive great benefit. Working with the tools over the area of the face connected to the kidneys, for example, sends a message down the meridian line of the kidney inviting them to let go of their toxins, relax and receive nourishment. This enables them to function at optimal capacity.

What are the benefits?
+ Carries nutrient-rich and oxygenated blood (food for the cells) to the skin and tissues
+ Drains lymph fluid (which is often filled with toxins and waste) out of the cells to be cleansed
+ Eliminates or greatly reduces wrinkles
+ Treats and prevents sagging skin (lifts and tightens the skin)
+ Aids in eliminating dark circles around the eyes
+ Aids in breaking up and releasing the skin from dark spots and hyper-pigmentation
+ Brightens the complexion
+ Greatly speeds the healing time of breakouts and pimples, helping these skin issues overall
+ Has the ability to heal and relieve rosacea
+ Aids in product penetration
+ Treats TMJ disorder and migraine headaches
+ Can be an alternative to injections and face-lift surgery (when practiced on a regular basis at home or when receiving treatments from a licensed practitioner).

Once you know the basics, just a few minutes of massage every day can have a major impact on skin’s tone, tautness and clarity. It’s just short of miraculous. Try the practice on one side of your face only and look in the mirror before continuing — you’ll see a visible lift and glow on the side you’ve worked on!

With a clean face and clean hands, apply facial oil (we love the CoE Glow + Calm Face oil) all over your face and neck. With the oil left on your hands, grease up your gua sha tool just slightly. Then, begin — all while taking deep, cleansing breaths.

CLEANSE FACE AND HANDS. And dry the face with a clean washcloth
APPLY FACIAL OIL (anywhere from 4-10 drops), covering the face and neck. Apply oil starting on the forehead and moving down in the direction of draining lymph fluid. This activates movement in skin and tissues, and it’s a nice prep before the gua sha.
WARM YOUR GUA SHA TOOL slightly by rubbing it between your hands. This also greases the tool up a bit so it doesn’t pull on your skin in the areas that didn’t receive as much oil.
SWEEP UP YOUR NECK ON BOTH SIDES. Sweep very gently over your Adam’s apple — this is more of an energetic sweep to activate your REN line. (The REN channel in Chinese medicine collects the body’s yin energy, treats the problems of the abdomen, chest, neck, head and face.)
SWEEP UNDER YOUR CHIN from the middle of your face out to your earlobe, keeping your tool flat. If you’d like, hold the skin under your chin with your other thumb as you glide the tool back to your earlobe in the opposite direction.
SWEEP FROM THE MIDDLE OF YOUR CHIN OVER YOUR JAWLINE back toward your earlobe. You can gently jiggle at your ear to encourage the fluid to drain down the neck to the lymph nodes at the base, just above your collarbone.
SWEEP UNDERNEATH YOUR CHEEKBONE, really picking up a lot of fluid that tends to be stored here, and direct it toward your hairline. You can lightly and gently jiggle your tool at your hairline.
SWEEP OVER YOUR CHEEKBONES, finishing at the hairline.
VERY GENTLY SWEEP UNDER YOUR EYES. I love sweeping from the corner of the eye moving in toward the midline. The muscle contracts in this direction and the lymph has little rivers flowing down from the eyes all the way from the inner corner of the eye to the outer corner. But if it feels better to sweep from the inner corner of the eye to the hairline, then do that — this is a more traditional direction for gua sha.
SWEEP OVER THE EYEBROW OUT TOWARD THE HAIRLINE AND UP FROM THE BROW BONE (up the forehead) finishing at the hairline. When you sweep up, do it in tiny sections, moving along the eyebrow in three to five sections.
SWEEP FROM BETWEEN THE EYEBROWS OVER THE THIRD EYE and up to the hairline.

SWEEP FROM THE MIDDLE OF THE FOREHEAD OUT TO THE HAIRLINE. (Tip: One of my favorite moves comes from Britta Plugg of Britta Beauty in NYC. She sweeps from the middle of the forehead — and doesn’t stop at the hairline — and continues into the hair, behind the ear and down the neck. It feels divine.)
NOW CARESS THE OTHER SIDE OF YOUR FACE, starting again with your neck and working through the steps.
SLIDE DOWN THE SIDE. When you’ve finished the other side of your face, finish the treatment by sweeping down the neck to assist with lasting drainage. Keep your tool very flat and hug underneath your jawbone. Lovingly sweep down the neck to the collarbone.
TAKE STOCK OF YOUR WORK. Does the one side look or feel different than the other?

Key tips to make the most of your practice:

+ We suggest sweeping each area at minimum three times. For a longer practice, sweep up to 10 times.

+ Keep your tool almost flat to your skin (about 15 degrees) rather than having the edge of the tool at 90 degrees to your skin.

+ When your tool starts to drag or pull on your skin, add a little more oil for better slip.

+ Have fun experimenting with which side and shape of the tool best fits with your face. Remember, what feels good to you may look different than how it looks in videos.